Pressure is one of the most frequently measured parameters in industrial process control applications. SmartMeasurement’s ALDPT series of pressure transmitters may be configured to measure absolute pressure, gauge pressure or differential pressure and is also available in a muti-variable configuration that is capable of simultaneously measuring temperature and pressure. This level of versatility allows the ALDPT transmitter to be used in virtually any industry or application where pressure measurement is required.

The SmartMeasurementTM ALDPT series of pressure transmitters are used for measuring process pressure, hydrostatic level, and liquid or gas volumetric or mass flow rates in all kinds of process applications. Within the ALDPT Series there are five different types of instruments to accommodate the wide variety of applications that exist in industry. SmartMeasurement’s staff of experienced application engineers is available to help users select among these choices and specify the instrument that provides the best solution for any pressure measurement application.

Pressure Transmitters from SmartMeasurement have been successfully installed in a wide variety of industries and applications including:

Why choose a Pressure Transmitter

Pressure measurement is the most widely measured variable in industrial process control applications.  Pressure measurement is commonly performed in applications involving all media phases including liquid, gas, and steam. For example, in the oil & gas industry, wellhead pressures are measured in subsea and topside locations. In water towers, pressure is measured to monitor and control water levels.  Pressure sensors are used to monitor the water line pressure in automatic sprinkler systems. Barometric pressure is used to predict the weather.

Request a quote pressure transmitters for your application or contact SmartMeasurement to learn more.

There are Four Main Types of Pressure Transmitters

Gauge Pressure transmitters (ALGPT) are referenced to atmospheric conditions.  The gauge pressure transmitter is widely used in the process industries to measure the pressures of liquid, gas, and steam and is capable of measuring both low and high pressure (up to 8700 psig).

Today, absolute (ALAPT) and gauge (ALGPT) pressure transmitters are replacing pressure gauges, switches, and transducers because are they are more stable and reliable than pressure transducers and because they have the ability to transmit the pressure value to control devices such as a PLC. This is particularly true in factory automation / industrial process control applications.

Differential pressure (DP) transmitters (ALDPT) have been used for more than 100 years to measure flowrate. Their wide install base gives them a pronounced advantage over other types of flowmeters; however, they are continually being displaced by new-technology flowmeters such as Coriolis and ultrasonic, especially when higher accuracy and greater reliability are required. 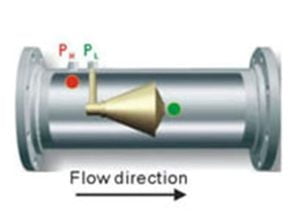 Every SmartMeasurement ALDPT pressure transmitter is constructed from high quality materials and is fully configurable in order to provide functionality and longevity with any type of process media in any type of application. All transmitter bodies and diaphragms come standard in stainless steel #316 L with Hastelloy C® or other exotic alloys available on request. Transmitters may be specified with a variety of process connections including male or female NPT or metric threads as well as flanged and with electrical outputs that include 4-20 mA, HART, and 4-20 mA proportional to the square root of pressure. Accuracy grades of ±0.5%, ±0.2%, and ±0.075% of reading is available and a wide variety of pressure ranges are available for each version of the instrument that is offered. Intrinsically safe / explosion proof approvals are available for operation in hazardous areas.

These instruments are also offered with a full line of accessories commonly required in industrial settings. These accessories include mounting hardware such as rigid and bendable brackets for mounting to 2″ pipe and isolation valve manifolds. The valve manifolds are offered in either stainless steel #304 or #316 materials of construction in either 2-valve, 3-valve, of 5-valve configurations. Capillary assemblies are also available in virtually any length with standard silicone fill fluid to accommodate high temperatures, or with optional inert fluids or exotic fluids such as NaK for ultra-high temperature applications.

Pressure is defined as exertion of force per unit area.  There are many different instruments used for pressure measurement, including pressure gauges, pressure sensors, pressure transducers, as well as pressure transmitters. There are also specialized devices for measuring pressure extremes, such as vacuum pressure.

Pressure sensors operate by sensing pressure and converting it into an electrical quantity. Piezoresistive and capacitive are the two most commonly seen types in industrial applications with piezoresistive being the most commonly used.

The electrical resistance of piezoresistive materials, measured in Ohms (Ω), will change when they are strained or compressed. A piezoresistive pressure sensor consists of a micro-machined silicon diaphragm that has a piezoresistive strain gauge diffused into it. The diaphragm is fused to a silicon or glass backplate. The sensor contains resistors that are typically arranged in the form of a Wheatstone Bridge Circuit. As pressure increases on the piezoresistive material, it is more resistant to the electrical current passing through it. This results in the output of the Wheatstone Bridge, measured in millivolts, being directly proportional to pressure.

Capacitive pressure sensors make use of a thin diaphragm that serves as one plate of a capacitor. This diaphragm is usually a metal or metal-coated quartz component. The diaphragm is exposed to a reference pressure on one side and to the process pressure on the other. Changes in pressure will cause a slight deformation of the pressure sensing plate, which will in turn cause changes in the electrical capacitance. These changes in capacitance are directly proportional to the pressure applied to the plate that is exposed to the process.

Pressure sensors detect variations in pressure by converting changes in resistance or capacitance into electrical values. These electrical signals are relatively weak and require amplification to carry these values over a distance. Pressure transmitters are typically made up of a pressure sensor, an amplifier, and signal conditioning circuitry which converts the raw signal into an industry standard output such as 4-20 mA or a frequency/pulse signal which may be transmitted over a long distance. If the raw signal is converted to a 0-5 or 0-10 VDC signal which may only be transmitted over an intermediate distance, the device may be referred to as a pressure transducer. The output signal from the pressure transmitter or pressure transducer relays the pressure reading to a flow computer, controller, or distributed control system (DCS).  Pressure transmitters also typically contain an LED or LCD display element that allows the user to view the measured pressure value directly at the point of measurement

A transducer converts a quantifiable physical parameter, such as pressure, load, force, or others, and converts the measured value into a low-level electrical signal. A transmitter includes all of the elements of the transducer and adds signal conditioning and amplification that allows the electrical signal to be transmitted over a longer distance.

Pressure transducers usually consist of a thin-film or piezo-resistive pressure sensor mounted to an industry standard process connection, such as NPT threads or an ANSI flange. The transducer converts pressure into an analog electronic signal, which is typically as a millivolt per unit pressure output. These signals are not linearized or temperature compensated. Pressure transmitters have additional circuitry that linearizes, compensates, and amplifies the signal from a transducer.

The different signal types are typically industry standard voltage signals (e.g., 0 – 5 or 0 -10 VDC), milliamp (e.g., 4 – 20 or 0 – 20 mA), or digital protocols such as HART or Modbus. Pressure transmitters can transmit the signal over large distances to a remote receiver and can also provide calibration features that can improve the accuracy and measuring range of the instrument, such turndown and zero/span adjustment. SmartMeasurement offers transmitters that are calibrated, tested, and can be reset remotely using MODBUS, Hart or other digital communication protocols.

Pressure gauges are relatively inexpensive mechanical devices that are read visually, do not require and electrical power, and do not provide any feedback signal. One of the most well-known types is called the Bourdon gauge, which contains a thin-walled metal tube that is typically threaded into the compartment where pressure is being measured. As pressure increases in the tube, the tube begins to straighten. On the exit side of the tube is a lever system that contains a pointer. As the tube straightens, the pointer moves. The pressure is read by observing the position of the pointer against graduated scale, in much the same was that an analog speedometer or tachometer in a car would be read. Common tube shapes include curved or C-shaped, spiral, and helical. This is a mechanical device that is manually read. Another type of mechanical gauge that operates in a similar fashion and also contains a pointer is called a diaphragm gauge.

Traditional gauges such as the Bourdon and diaphragm gauges are sensitive to vibration and condensation. Another type is called a “filled” pressure gauge, and it is filled with a viscous oil, typically glycerin. This design has fewer moving parts than the traditional pressure gauges, and is more reliable. This design dampens pointer vibration and is not susceptible to condensation.

Have questions about our Pressure Transmitters? Contact the experts at SmartMeasurement today! 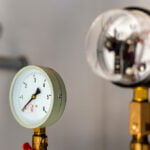 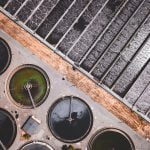 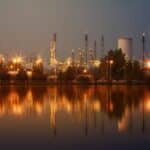